Have you ever felt rejected by your significant other? 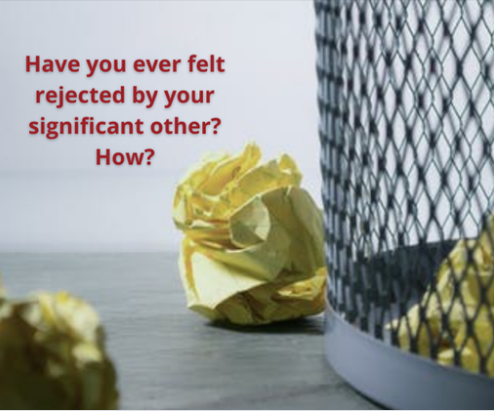 YEP. It is a shitty feeling. Here is how I worked through it, because we share a deep love.

I came out wearing a sexy outfit, and he wasn’t ‘in the mood’. OUCH. I quickly changed, it’s embarrassing, more so when you in the earlier stages of a relationship. I stopped to pause, and after I asked how he was doing, and if he was feeling stressed out, and he talked to me for an hour after explaining why he was frustrated and in his head. His lack of interest in me at that time, was actually nothing to do with me, he was hurt and stressed out because of his family.

This happened early on in our relationship, and over time I can now spot the signs of when he is stressed or frustrated, and before he starts to push me away a bit or distract with technology etc. I ask him how he is doing, and if I can make him a nice meal, or put on a movie he wants to watch, and just try to connect on whatever level he is comfortable to while he decompresses. We communicate so much better now, so this particular thing doesn’t really happen anymore, and he has learned that it feels better to talk to me about his frustration, rather than hold it in, which is so awesome.

In short, for me I have to learn not to take things so personally, and look at what is really going on. When I was dating a lot before, getting ghosted was so annoying, but I just got a tough skin and decided that it wasn’t worth my time to give a $h!t about people who are that rude or selfish. Sometimes its not worth our energy, sometimes it is, but regardless, we are ENOUGH as we are.